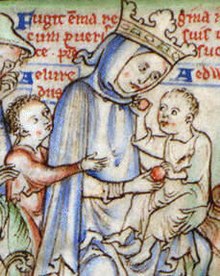 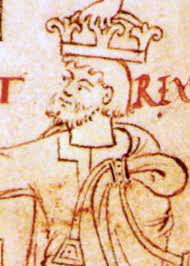 Annals Britannica tells of Emma of Normandy (984-1052) who was the second wife and queen of two kings of England and gave birth to sons from each marriage who also ruled England.

Ethelred the Unready took Emma, daughter of the Duke of Normandy, to be his second wife. Ethelred was succeeded in 1016 by Edmund Ironside, Ethelred’s eldest surviving son from his first marriage. He died later in the same year, perhaps of wounds, after losing in battle most of his kingdom to Cnut, King of Denmark. Emma sent her two sons back to Normandy for safety.

In 1017 Emma was taken as his wife number two by King Cnut who had taken control of all England. Emma thus became queen of England twice. As Cnut’s wife, she was also Queen of Denmark and Norway. Their son Harthacnut briefly ruled England and Denmark 1040-42.

Mother of the Confessor

Emma’s two eldest sons by Ethelred visited their mother in England in 1036. during the reign or regency of Cnut’s son by his first marriage Harold Harefoot. Aelfred, the younger of the two brothers was taken prisoner by the ambitious Saxon Earl Godwin of Wessex. He was blinded and died from his wounds. Emma’s eldest son, Edward, escaped back to Normandy. He became King of England after the death of Harthacnut and is remembered as the pious Edward the Confessor.