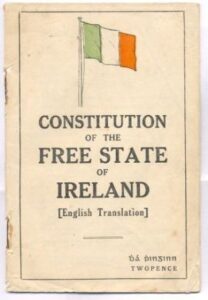 Annals Britannica attempts to record events involved in the political separation of Ireland from the rest of the British Isles in 1921. The hundredth anniversary of the Anglo-Irish Treaty is remembered this year: it marked a fundamental change in a stormy relationship which had endured for 750 years and is discussed in nearly every section of the Annals.

In 1801, Ireland was fully integrated into the Kingdom of Great Britain and Ireland. It had formerly been ruled as a separate kingdom by the English monarchy and was usually administered by British office-holders with a parliament which excluded Catholics. After 1801 the Irish parliament was abolished and Ireland sent a substantial number of MPs to the Westminster parliament. After many years of political activity, Irish nationalists finally persuaded the Liberal Government to pass a bill granting Home Rule to Ireland in 1914, but the bill was shelved until the Great War was ended.

The religious and ethnic divide in Ireland

Irish nationalists won increasing support for complete independence after The Easter Rising was put down by British troops in 1916.  However Ireland was itself divided between the Gaelic and Roman Catholic population which had an overwhelming majority in the three southern provinces of Leinster, Munster and Connaught, and a Protestant Unionist majority in the northern province of Ulster. The Unionists were mostly descendants of Anglo-Scots migrants who established plantations in much of Ulster in the seventeenth century. In 1912, many thousands had signed The Ulster Covenant, organised by Sir Edward Carson and James Craig, to resist any attempt to deprive them of British citizenship.

The IRA and the Black and Tans

After the war, many nationalists were no longer satisfied with home rule and demanded complete independence. Sinn Féin MPS won a majority of parliamentary seats in Ireland and refused to take their seats in Westminster. They formed their own parliament, the Dáil, in Dublin, under the leadership of Éamon de Valera. The British government outlawed the Dáil and Sinn Féin, and a violent struggle broke out between the nationalist Irish Republican Army (IRA) and the Royal Irish Constabulary, strengthened by the para-military ‘Black and Tans’.

In 1921 the British government and Irish nationalist representatives led by Michael Collins signed the Anglo-Irish Treaty which split the Island of Ireland into the Irish Free State, which was to remain a British Dominion, and Northern Ireland with its own Parliament at Stormont in Belfast, which chose to remain part of the United Kingdom. The three westernmost counties of Cavan, Donegal and Monaghan with Catholic majorities were shorn from Ulster and became part of the Free State.

The Dáil narrowly approved the Treaty, but De Valera would not accept that Ireland should remain a part of the British Empire. A brief civil war broke out in the Free State involving opposing elements of the IRA and the Irish National Army. Collins was assassinated, but the IRA was eventually subdued after losing many of its experienced commanders. De Valera reluctantly accepted the Treaty as a fait accompli on the way to complete independence, and called for an end to hostilities. A new election confirmed a majority in support of the Treaty.

In 1926 de Valera left Sinn Féin and formed a new party Fianna Fáil which became dominant in the Dáil. A new constitution was approved in 1937 with no declaration of allegiance to the British monarch; it also included a territorial claim to Northern Ireland. The Free State remained neutral throughout WWII. In 1948 it became the Republic of Ireland and gave up its few remaining elements of Commonwealth membership. The IRA continued to exist but was largely non-operational until the troubles flared up in Northern Ireland. An off-shoot known as the Provisional IRA was formed in 1969 which was declared an illegal organisation in the Republic and a terrorist organisation in the UK. Provos were responsible for most of the anti-Unionist violence during ‘The Troubles’, which were paused by The Good Friday Agreement signed by a range of Northern Ireland organisations and the governments of the UK and the Republic in 1998.