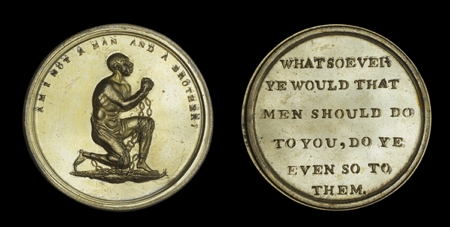 The beginning of the English Slave Trade

The matter of slavery is referred to and discussed in various section of Annals Britannica, a comprehensive review and timeline of British history.

Britain first became involved in the transatlantic slave trade when Sir John Hawkins delivered slaves taken from Portuguese slave traders to Spanish colonies in the Caribbean. His third slaving voyage ended in disaster in 1568 when the Spanish attacked his flotilla – he and his young nephew Francis Drake were lucky to escape with their lives (Annals, The Later Tudors).  The fate of the slaves is unknown,

The first record of slavery in a British colony is in 1619, when an English privateer brought 20 or so slaves, kidnapped from a Portuguese slave ship in the Caribbean, to Jamestown in the colony of Virginia.  Traders from Bristol, Liverpool and other British ports were soon competing for involvement in the slave trade.  Jamaica was taken from Spain in 1655 by an expedition sent by Oliver Cromwell and it soon became the premier English slave market in the West Indies (Annals, Crown and Parliament).

The Royal African Co and the Slave Trade

After the monarchy was restored, the king’s brother James Duke of York helped found the Royal African Company with interests in gold, ivory and hardwood, but the RAC and its successor company was soon heavily  involved in the slave trade, centred on the fortress of Cape Coast Castle, captured from the Dutch, on the Gold Coast of West Africa (Annals, Restoration and Replacement) in 1664. During the next century England, later Great Britain after union with Scotland in 1701, became the world’s premier seaborne trading nation and transatlantic slave trader with trading fortresses established on the Gold Coast, the Gambia River and elsewhere along the Western coast of Africa.

Early opponents of the Slave Trade

Early expressions of concern about the wrongs of the slave trade were expressed by The Quaker movement and James Oglethorpe who established the last British American colony of Georgia in 1732 (Annals, Conquest and Expansion). John Wesley also regarded slavery as ‘villainous’, although his fellow Methodist George Whitfield founded an orphanage which actually owned slaves.

The cause of black slaves was first raised in British courts by Granville Sharp, a clerk at the Tower of London, who secured in 1772 a ruling by the Lord Chief Justice in The Somersett Case that no statute in England upheld slavery and it required an Act of Parliament to make it legal.  However the judgement did not apply to Britain’s colonies. in 1783 Granville Sharp and the freed slave Olaudah Equiano ensured wide publicity for the horrific details of The Zong Trial, which heard that about 130 African men women and children were designated as ‘general cargo’ to be thrown overboard in order to conserve water supplies.  In 1787 Granville Sharp and his friend Thomas Clarkson joined with a group of Quakers to form The Society for Effecting the Abolition of the Slave Trade. Clarkson travelled thousands of miles collecting evidence about the evils of the trade and Granville Sharp, the chairman if the Abolitionist cause, succeeded in raising ever-increasing support for the cause. An attempt was made to establish Sierra Leone as a home in West Africa for poor blacks from London and loyalist ex slaves from the defunct American colonies. William Wilberforce, supported by some of the most powerful orators in parliament – Charles James Fox, William Pitt and Edmund Burke, failed to get a motion passed to abolish the slave trade in 1792; at that time, members were more concerned about the Revolution in France (Annals, The Revolutionary Age).

Toussaint L’Ouverture and the overthrow of Slavery in Haiti

The abolitionist cause was further set back when a large British force was sent to capture the rich French sugar island of St Domingue (Haiti) in 1793.  Much of the colony was controlled by an ex-slave called  Toussaint L’Ouverture and British commercial interests were worried his example might cause problems in Britain’s own West Indian colonies. The British troops suffered badly from Yellow Fever and died in large numbers.  Eventually they withdrew in 1798 leaving L’Ouverture in charge of Haiti until he was eventually taken prisoner by French forces in 1802. Nevertheless, Haiti was able to retain its independence as the first independent ex-slave state in the Caribbean. (Annals, The Revolutionary Age).

Abolition of the Slave Trade and its Enforcement

In 1807 Wilberforce was finally able to persuade the English parliament to approve the abolition of the slave trade, although slavery itself continued to maintain the economies of British West Indian colonies as well as the colonies of other European countries and the southern states of the USA.  Granville Sharp, who had devoted most of his life to fighting slavery and the cause of black people in England, lived to see the slave trade outlawed, but died in 1813 at the age of 77, 21 years before slavery itself was abolished in all British dominions, ‘Leaving behind him a name That will be Cherished with Affection and Gratitude as long as any homage shall be paid to those principles of JUSTICE HUMANITY and RELIGION which for nearly half a Century He promoted by his Exertions and adorned by his Example’.

The Royal Navy West Africa Station was established in 1808,  based on Freetown Sierra Leone, with the intention of suppressing the Transatlantic slave trade. Between 1808 and 1860 ships of The Royal Navy West Africa Squadron  captured approximately 1,600 slave ships and 150,000 Africans were freed.  Action was also taken against African leaders who refused to participate in outlawing the trade. Thousands of sailors and marines died or their health was permanently impaired from serving on that unhealthy posting (Annals, Reaction and Reform and The Victorian Era I ).

Slavery Abolished in the British Empire

Wilberforce and Thomas Clarkson assisted Thomas Fowell Buxton to set up the Anti Slavery Society in 1823.  The passing of The Great Reform Act 1832 weakened the West India lobby in the House of Commons and strengthened the abolitionist cause.  A serious slave revolt in Jamaica 1831/2 reminded folk of the horrors of the Slave wars in San Domingue/ Haiti and the government was persuaded that the costs and dangers of supporting slavery in the West Indies were becoming well-nigh insupportable. The Slavery Abolition Act was passed in 1833 and Wilberforce died 3 days later. Clarkson was the only original member of the original abolitionist leaders who lived to see the last slaves in the British Empire set free in 1838, the year after Victoria came to the throne. Slaveowners were paid £20 million in compensation by the British government (Annals, Reaction and Reform).  Slavery in East India Company territories was formally abolished in 1843, although caste servitude and bonded labour arrangements continued in many parts of India.