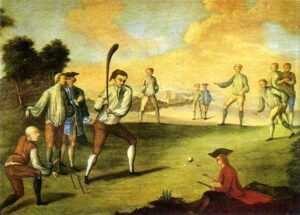 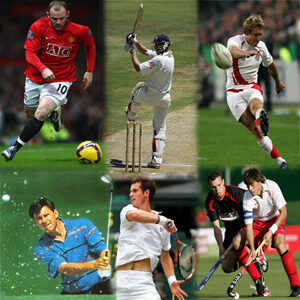 Sport and games play a part in many cultures, but Annals Britannica notes in many of its entries how sport has played an important part in British history. The importance of the longbow as a war weapon is underlined by several medieval laws which tried to forbid pastimes which threatened to interfere with target practice on the village greens of England. Many games and pastimes were also regarded with suspicion by the ecclesiastical authorities, who suspected gambling was often associated with competitive sport.

However, nothing could prevent for any length of time the sporting pleasures of the British townspeople and peasants. Games and sports involving individual contests, such as marbles, skittles and quoits were played on the streets and greens from earliest times. Men and boys would also try their skill and strength at wrestling, and other personal contact contests.   Team games were also popular and, on major feast days, whole teams became engaged in the rough and tumble of primitive forms of ball, in which inter-village rivalry often spilled over into bloody conflict.

The earliest English specific reference to Football is in a 14th century sermon by John Wyclif. The rough, localised sport Wyclif witnessed evolved into a national sport beloved of the working population of Britain’s towns and cities. In Victorian times, the early rules for Association Football were devised in 1863, the Football League was established in 1888 and the FA Challenge Cup competition, first played in 1872, became a national institution as the professional teams of the league took over from the amateur and public school teams of earlier days, The British game of Association Football, also known as Soccer, became adopted as the world’s most popular sport during the twentieth century.

Another code of football developed at Rugby school. Players were allowed to carry the oval ball used in Rugby Union Football, which was founded in 1871. A professional form of the game soon evolved in the north of England and became the separate sport of Rugby League, originally called Northern Rugby Football Union  in 1894. Both brands of Rugby football (Rugger) are now great international sports.

Early  games played with stick or club and ball gave rise to cricket, golf, hockey and tennis – the latter is not to be mistaken for the medieval game of real tennis which was played in an enclosed court by rich and aristocratic players.

Cricket was proscribed by Puritans through the first half of the seventeenth century. but grew in popularity after the Monarchy was restored. The Laws of Cricket were first codified in 1744. The formation of the Marylebone Cricket Club (MCC) in 1787 and its home ground at Lords cricket ground in 1814 confirmed cricket as the premier English summer team game. Cricket soon became established throughout the British Empire and remains a keenly contested sport in most countries which are members of the Commonwealth of Nations.

Golf, whose rules were first written in 1744 for the Gentlemen Golfers of Leith, had the same significance in Scotland. The game was soon taken up in England and golf clubs were also eventually established in every country of the empire. Unlike the football codes and cricket, golf was also taken up enthusiastically in the United States which helped the British game on its way to becoming one of the world’s premier sports.

United States enthusiasm also allowed the game of Lawn Tennis, devised by major Walter Wingfield as pastime for the rich and leisured classes, to achieve the status of a world sport, now played on a variety of surfaces and simply known as Tennis. The first Lawn Tennis Championship was held at Wimbledon in what was originally a Croquet club in 1877. It remains the only one of the grand slam tennis events played on grass.

The game of hockey divided into field hockey and ice hockey which is a favoured sport in colder areas of the world such as Canada. Field hockey evolved from ancient stick and ball team contests and became a recognised sport in the eighteenth century. It continued to evolve in the next century until the Hockey Association was formed in 1886. Like other sports, hockey was introduced around the world by British army units and officials serving in the British Empire.  It remains a popular world class sport for men and women.

The British talent for organisation. adaptation and control led to rules being devised for numerous other sports. Snooker and billiards clubs were established in most towns and tables were always available in officers’ messes across the world. Billiards was eclipsed by the related cue game of snooker when it was popularised as an ideal spectator sport with the advent of colour TV in 1969. In America neither game has achieved the popularity of their cue game Pool.

Even the brutal bareknuckle contests of prize fighting were brought into the realm of gentlemanly sport by the Queensbury rules for Pugilism aka Boxing in 1867.

Horseracing over the flat, hurdles or steeplechasing is probably the longest-running and most hotly-contested of all sports Britain introduced to the world by virtue of the English Throughbred horse gene being present in racehorses around the world. The name of The Derby, England’s premier classic flat race has been adopted by other major racing events around the world and The Grand National remains the world’s most testing major steeplechase.

From the mid-twentieth century British drivers and engineers were continuously at the forefront of the new Formula I Motor Racing sport. Colin Chapman of Team Lotus, Frank Williams and other British team leaders, together with British drivers such as Jackie Stewart and, lately, Lewis Hamilton, for long periods dominated the sport, which is organised and controlled by  a company led by the British entrepreneur Bernie Ecclestone.

Waterloo was won on the playing fields of Eton

The above aphorism expresses the widely-held Victorian belief that team sports instilled the benefits of discipline, a code of honour and qualities of leadership which equipped men for the arduous duties of  managing the British Empire. The poem Vita Lampada by Sir Henry Newbolt perfectly expresses the concept.

Naturally, this view was not shared by Britain’s opponents and is regarded with disdain by those who struggled to throw off British rule but, strangely enough, the sports which upheld and promoted Empire still inspire most of the independent members of the Commonwealth, who take great pleasure when their teams thrash those of their old imperial dominator. No sporting event is more viscerally contested than the Ashes Cricket series between Australia and the MCC (alias the UK). However sport remains a great unifier among the nations who have grown out of the old empire.