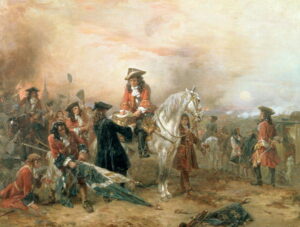 Death of the first Duke of Marlborough

Annals Britannica, the history website by Tom Bliss records that this year marks the three hundredth anniversary of the first Duke of Marlborough‘s death. He was an ancestor of Sir Winston Churchill and one of Britain’s greatest soldiers.

His great victory at Blenheim in Bavaria in 1704 prevented King Louis XIV of France from dominating all Europe. To commemorate the victory he was created duke, and the royal  manor of Woodstock, where he and his duchess built the splendidly baroque Blenheim Palace, was given to him by Queen Anne.

The Duchess and the Queen’s close friendship ended in a furious disagreement and, despite his continued military successes in three more great battles and a spectacular final – and almost bloodless – manoeuvre to take the fortress which guarded the approaches to Paris, he was dismissed and charged with corruption. However, as she lay on her deathbed, the queen recalled Marlborough, but he never commanded another army and died whilst living quietly at Blenheim after suffering a severe stroke in 1716. The duchess lived for another twenty two years and remained a powerful figure in Whig circles.

Marlborough possessed the essential qualities which distinguish the greatest generals. He had an eye for territory and a fine sense of timing, which together with superior logistical skill and organisation, ensured he never fought a battle he did not win, nor laid siege to a town he did not take. His military successes and the shrewd political and financial management of  Lord Godolphin, Lord High Treasurer, raised Great Britain to become the greatest power in Europe with a growing overseas empire.